The Coleman 275, 2-mantle lantern. Some people love them, while others hate them. Due to the wide ventilator I consider the 228 lantern, which was produced from 1928 to 1978, to be the predecessor to the 275. The International Coleman Collectors Club (ICCC) website shows 275 production dates of 1976-1979 and the 275A 1980-1983, so the 275 was made for only 8 years. It’s brown, though this wasn’t the first time Coleman painted their appliances brown, but compared to the various greens, reds, black and more recently silver and gold, many find the 275’s brown color ugly. It also has an unusual tapered shape to the globe/chimney. But, it seems the 275 gained a bad reputation because Coleman began using a seemingly new and unusual valve configuration which was responsible for leaking fuel, flare-ups and uncontrolled fire. However, as you’ll see, the configuration wasn’t exactly a radical departure from other GPA’s which had already been in production for 25 years at the time the 275 was introduced. In this blog post I’ll tear down the 275 and show the valve assembly and part responsible for its reputation and how to check for potential issues. Then finally, how to return the lantern to proper operating condition.

I bought two 275 lanterns recently, one made in July, 1976 and the second was made in November, 1979. The 1979 lantern cleaned up easily and didn’t show signs of any fuel leaking from around the generator and the collar so I installed new mantles, fueled it and lit it up. It burned nicely and shut down properly. So, I left it alone and moved on to the 1976 lantern which showed a lot of fuel residue around the generator, base plate, collar and vent tube. I fueled it up, pumped it up and opened the valve and then closed it. I didn’t even bother trying to light it. Fuel continued to seep out from around the collar and down the generator, until I opened the fuel cap to release pressure.

The failure to prevent fuel from seeping out even when the valve is in the OFF position is the problem with the early 275 lanterns. What happens is that, unknown to the user, the fuel seeps all over the burner parts, mantles, generator, and base plate, so that upon pressuring and putting a match to the mantles, the entire lantern within the globe seemingly starts on fire! Worse yet, since the fuel flow can’t be stopped it can burn for a very long time. This could definitely ruin an otherwise pleasant camping trip. So, what is wrong with this lantern? We’ll get to that shortly.

I proceeded to disassemble this lantern, removing the bail (handle), vent top, globe and generator. Then, I removed the burner assembly brass nut and pulled out the burner assembly. This is easier to do on this lantern than it is on the 220 and 228 lanterns I’ve worked on. Nice! Next, I removed the base plate nut and lifted off the base plate. Easy.

Removing the burners and base plate is easy on the 275

At this point I removed the collar and also the valve knob. The valve knob is removed by depressing the retainer on the back with your finger, pressing it towards the knob. It should slide off easily.

Depress the metal tab and the knob slides off easily

Removing all of the mentioned parts will reveal a very substantial brass assembly. I was surprised at how large it was as compared to the 220/228 lantern valve assemblies being made at that time. I tried to remove the valve assembly by holding it in a vise but that didn’t work. It seems as though Coleman used a thread locker which makes it very difficult to remove. So, I went back to using my typical removal setup using a strap wrench around the base of the fount, a large adjustable wrench and a piece of pipe to provide more leverage. Plus, I had my wife hold the tank down so it didn’t try to tip over as I applied pressure on the wrench extension. This broke it free and I was able to remove the valve easily after that. 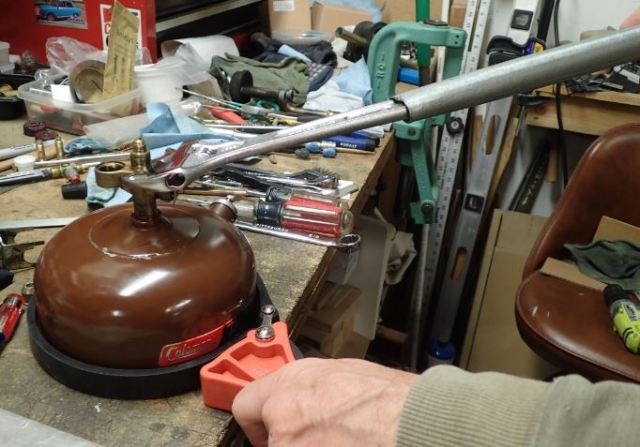 With the valve assembly removed I could now see the Fuel/Air (F/A) tube. It looked different than other F/A tubes in that the drilled air holes normally found on the side were missing, and instead there were vertical air openings near the top.

I removed the F/A tube where I found the problem part. Instead of using the typical tapered brass valve stem, Coleman began using a Schrader valve to open and close the flow of fuel. The Schrader valve core uses a small gasket in the bottom cup. When the valve is depressed it separates the gasket from the valve and allows fuel to flow. When released it stops the fuel flow. Well . . . what’s so unusual about this? Nothing, really. Schrader valves are used in bicycle and auto tires, automobile fuel systems and many other places. The issue for the early 275 is twofold. First, the gasket material, it’s been rumored, was not especially fuel resistant on many of the early GPA’s which used the Schrader valve, and second, Coleman had been using the tapered brass valve for 60-70 years and they last pretty much forever. So, when a valve begins failing after a short period of time, that is less than 10 years, nobody expects a failure and consequently don’t know to check for issues.

Let’s take a closer look at this valve design. To do this I needed to remove the Schrader valve core which didn’t want to come out. The top threaded piece separated from the rest of the valve core, which was stuck and I couldn’t pull it out. What I did was heat the valve a little with a butane torch which appears to have softened the valve core seal and then it pulled out easily.

Note: In the next section I show the valve stem after it was removed from the valve body. To change the Schrader valve core, you do not need to do this. I removed it only because I was curious.

The inner parts of the valve assembly looked familiar. It has a valve stem which is really just a cam to operate the eccentric block and simultaneously push down on the Schrader valve. 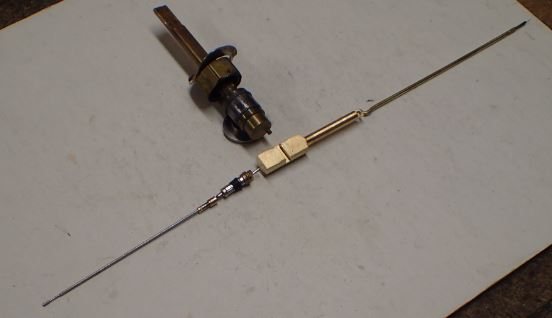 The inner parts of the 275 valve

In fact, I have seen this setup before . . . it is a similar design to the military M-1950 cooking stove and the Aida Record lantern, both of which had been using a similar design since at least 1950.

So, there is really nothing radical about Coleman’s design. The issue, I think for most people (including me), is that Coleman took a rock-solid valve design and replaced it with something which is far more prone to failure over time, and . . . who want’s that? Materials technology has progressed since the 1970’s so I suspect new Schrader valves with proper fuel-resistant gaskets will last for a long time, as has been shown by my Model 400A stove. The Schrader valve in it lasted for more than 20 years before I replaced it. It’s too bad they couldn’t create a design where it would be easier to replace, and not require complete disassembly.

Replacing the valve core with the correct part brought about some apprehension. My new replacement valve cores for 400A stoves looked different than the original 275 valve core and I was now thinking that those would not work. I ended up ordering some 275 valve cores from Old Coleman Parts and while closer to the original they were still not an exact fit.

All three fit differently with the fuel control rod, as well. Was this gap going to be an issue? 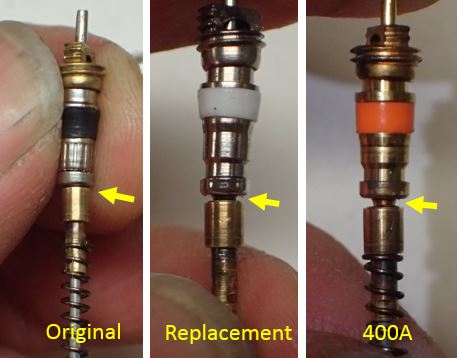 Eventually, what I did was assemble the parts using the Old Coleman Parts replacement valve core with the valve for a test fit. Then, I could see how far the fuel control rod protruded from the bottom of the F/A tube when the valve was in the On position. In the On position the fuel control rod should extend far enough that you can see the narrow part of the rod. Initially, this didn’t work right. The wide area at the top of the stem prevented the valve from being depressed fully and didn’t allow the fuel rod to extend far enough. So, using a fine file I narrowed it down to the same diameter as the rest of the stem without making it shorter. 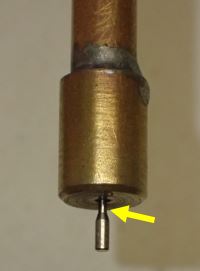 In the On position you should see the narrow part of the control rod, at least a little

Also, you will also need to ensure that the valve core is fully closed when the valve is in the Off position. Sounds easy, right? Well, I don’t like working on GPAs when they don’t have tapered pipe fittings and this particular F/A rod threaded fitting is not a tapered pipe thread. Ugggh . . . So, I went to the Coleman Collector’s Forum searched for 275 valve and read that I should blow air into the generator end of the valve and unscrew the F/A tube until the airflow stopped. Double ugggh… No wonder people get frustrated with the 275. Then, I was to mark it, remove it, add thread locker, reinstall it and test it again. I actually tied this with Permatex #2 first, but it would not fix the F/A tube in place as it does not harden, so I had to clean all of the parts again and use the Blue thread locker. This seemed like it worked okay, but I wouldn’t know for sure until I reassembled everything.

I reversed my disassembly steps, threading the valve assembly into the fount. Then adding the U-shaped bracket and C-clip, collar, base-plate, burner tubes and generator. I burned-in some Peerless 2C-HG mantles, fueled it, added the globe and finally the ventilator. I gave it a go, but immediately noticed fuel coming out from below the base plate and collar. It turned out that I hadn’t tightened the valve stem graphite packing enough (another good reason to NOT disassemble something if you don’t need to do it). Luckily, no harm done. I reassembled everything again and it lit right up and burned nicely. Best of all it shut down properly and didn’t leak fuel when turned OFF!

From what I’ve read, Coleman modified the F/A tube design for the 275A model eliminating the Schrader valve core adjustment and improving the material for the gasket in the valve core itself making it a more reliable lantern. Now that this one is repaired with a better valve core, I expect it to work well for a long time.