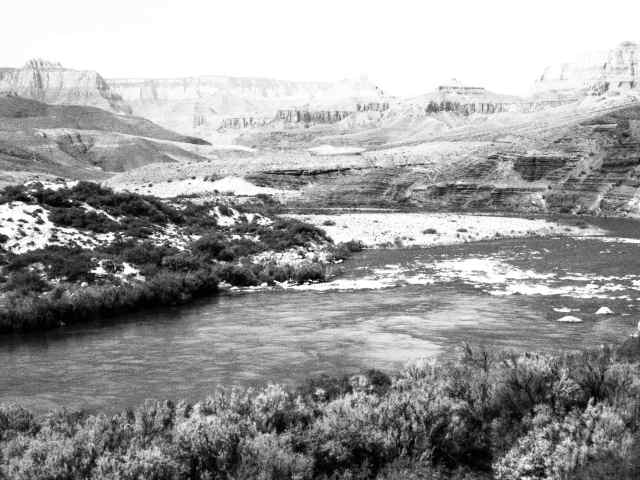 Colorado River in the Grand Canyon

We stayed at the Marble Canyon Lodge on the evening before the trip. The lodge is right across the street from the meeting place at the airport. The lodge also has a restaurant, so we ate breakfast there and later drove across to the parking lot, unloaded our gear and waited. Planes began arriving, eventually bringing in Rod’s friends who invited us on this trip. There were several groups of people and at least two    outfitter companies meeting there. Each company had vans and trailers. We loaded our gear, split into groups, got in the vans and rode down to the put-in.

Panoramic view of the put-in at Marble Canyon

We were assigned personal day-use dry bags and a large dry bag for our duffel bags, which also included a sleeping bag, sheet and tarp. A fire line was formed to load our gear on the raft and once loaded we shoved off. The guides provided instructions  and soon we passed under the Navajo bridges.

The clothes I wore today were inadequate, I’ll need to do better tomorrow. My shorts and t-shirt did not dry as quickly as I expected in the 100+ degree heat and I found myself quite chilled by the end of the day. The water temp is in the 50 deg F. range and since we don’t remove PFDs while on the raft one needs to show up dressed correctly, first thing. We stopped for lunch under some overhanging cliffs, river left, which gave us an indication of what the food would be like for the week. I didn’t write it down in my notes, but it was either chicken salad in tortillas or a cold-cut sandwich and also bananas. Either way, it was good. I ate lightly so as not to feel stuffed in the hot sun.

We went through some nice rapids, one being a 6 on their 1-10 scale. Unfortunately, I either twisted or strained my right arm when I was caught off-guard by a wave. I was trying to pull myself forward just as the wave hit me. Later on, Shad asked me if I was okay while I was flexing my right arm. I told him what happened and he said that it is not uncommon for men to injure themselves (torn biceps) because they react by trying to fight the force of the wave. Injuring myself on the first day of trip was a little depressing, but I monitored my arm for bruising and swelling during the evening, and by the time I went to bed there was neither.

By 3:30 PM we stopped for the day. A nice, large beach area river-right, with plenty of space for people to camp. Our raft of 14 guests didn’t travel alone, but instead with another raft of 14 guests. Check out my previous blog post for a description of the rafts. You can use a tent if you wanted, but almost nobody did. They carry cots for everyone, so what I did was set up my cot, level it, throw my unrolled sleeping bag on top and used the sheet to cover myself when it got cool enough to use it, which was typically about midnight.

This site, like others on the trip, would have a large gathering area where we set up folding chairs, ate breakfast and dinner, and socialized.

We had steak, rice and asparagus for dinner, and frankly, I needed to stuff myself to finish the steak. Whoa!

The area on the sand was hot, even when we all went to sleep at 10PM  Mountain Time, so I was a bit jealous when I discovered that the guides slept on the raft over the cool river. I woke up at 3AM and it was very comfortable laying on the cot looking up at the clear skies and the Milky Way.

We did two short hikes today. One was a climb up to a shelf along the river to some petroglyphs, and the other to a deteriorating wooden boat and hanging garden, growing, thanks to some water seeps in the rocks. The guides love to talk about the geology of the canyon. Their talks are informative. I used my hand in the petroglyph photos to provide a size perspective but didn’t touch them for the sake of preservation.

Petroglyphs and view overlooking the river 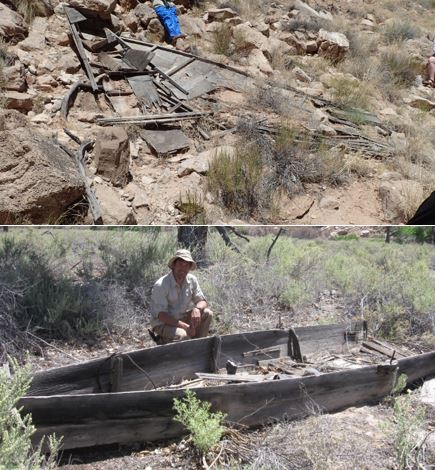 It is difficult to truly capture the immense features of the canyon, but I tried anyway.

Typical view of the Grand Canyon from the river

The rapids were pretty mild today, though we were warned that they get larger as we move through the canyon. I wore my black NRS Wavelite top today which worked pretty well, though I still got a little chilled late in the afternoon. It is really surprising how difficult it is to remain warm! We got to camp at 3PM or so, but today there was a twist. We unloaded our personal gear and then got back on the rafts and went across the river to the Little Colorado River.  This river is warm and turquoise in color. Everybody went for a swim. It was a nice change from the cold Colorado River and suitable for sitting on the bottom while enjoying a beer.

Given that we’re in that “big hole in the ground” called the Grand Canyon, the camp sites always have nice views.

View from camp across from the Little Colorado River

Today, breakfast was pancakes and sausage and a decorative presentation of pineapple. Along the river were 4 hikes; petroglyphs, ruins on a hilltop, pottery shards, and a canyon behind camp. 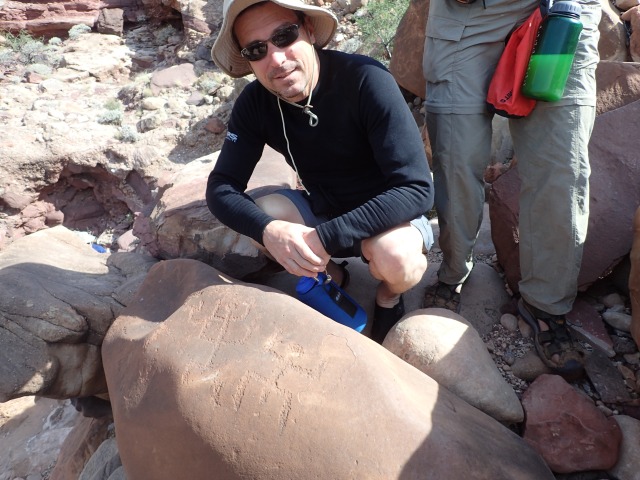 Petroglyphs down river from the Little Colorado River

One thing to note about hiking in the desert heat. I wore that black NRS Wavelite shirt. I soaked it in the river, put it on and then joined the others on the hike to the hilltop ruins. Along the way a guide asked me if I was hot. I hadn’t really thought about it, so I replied why is it hot out here? He replied with, “It’s like 100 degrees”. I was a little confused. The Wavelite top, when soaked with water, kept me so cool that if he had told me it was in the mid-70s I would have believed him. I looked around and noticed that everyone was sweating, while when the wind blew I was practically cold. Wow! That’s nice.

The view from the hilltop ruins was great.

Eric, Jill and I rode the front on a #8 rapid today. I had been using my left arm in front, which is weaker than my mildly injured right arm, and lost my front grip. Well, part of it was because I didn’t want to injure my left arm too, and therefore didn’t hold on too tightly. I figured that if I was blasted over-board, I could always float downstream and get picked up. The GoPro video  looks funny. It’s a view forward, then a big blast of water, then a view off the side of the boat. If that’s an 8, I can’t wait to see what a #10 looks like tomorrow morning. We got off the river at the typical time in the afternoon. By now, everyone is getting to know each other a little better and socializing is getting easier.

Around midnight, the wind kicked up . . . a lot. In fact it was fierce! I wrapped my sheet around my upper body protecting my head and creating an air pocket so I could breathe without sucking in sand. I turned on my flashlight at one point and could see the air was filled with sand. Around 1AM it began to rain. Arrrrgh! I had to get up to get my tarp out of the dry bag. Even with the wind I was able to get a decent night’s sleep.

Time for a writing break. I’ll get to the next 4 days later.