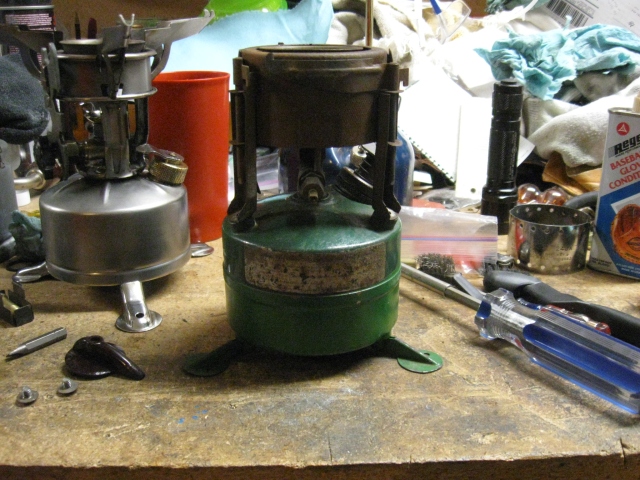 I’ve got a handful of the U.S. Army’s M-1950 stove. My father had one of these and an M-1942 MOD stove which he stored in the garage rafters when I was a kid. Sometimes I would climb up there and take them down and play with them (never lit them, though). The moving parts were interesting and thinking about them years later sparked a renewed interest in them and got me started on collecting stoves and lanterns and lamps and such. I acquired most of the M-1950 stoves last fall (2014) from a guy selling a bunch of parts.

According to the cover of the Department of the Army Technical Manual (TM 10-708), dated October 1951, this stove is called Stove, Cooking, Gasoline, M-1950 One-Burner. Copies of the original manual are available, as I have one, and have seen them and reproductions for sale periodically at online auction sites.

The M-1950 stove’s On/Off valve seal (in some lanterns and stoves this is called a foot valve) is in the lower part of the valve assembly and requires removal of the entire assembly to replace. This can be a difficult to service item though it is frequently bad and needs to be replaced. When I received the 1951 Coleman stove everything seemed to work okay until I went to shut it off and discovered that the fuel kept coming out. To check your on/off function, cycle the pump thirty or more pumps and then turn the valve off and then on. If fuel still comes out or if you still hear air leaking, the gasket will need to be replaced.

The original style gasket is no longer available (as far as I know) but a fuel-resistant O-ring of the right size and inserted into the fuel needle will work though I have had some issues with these consistently sealing. As as of this edit, I see that Old Coleman Parts offers a flat gasket, called M1950 Fuel Tube Gasket which works well.

Disassembly can be accomplished at your own risk, but here’s what I do. After removing the windscreen, valve knob and vaporizer, I use a strap around the tank and an adjustable wrench on the valve assembly. Be sure that the eccentric stem body is installed or you will risk deforming the valve body making it difficult, if not impossible, to re-install the valve stem later.

There’s not a lot to go wrong with the valve assembly other than it getting dirty or clogged from old fuel, rust or the on/off gasket. A good cleaning with denatured alcohol or vinegar, or both is in order before re-assembly. It’ll look good as new when you’re done. The vaporizer should at least get a cleaning, though sometimes the screen is so corroded that it’s easier to buy a replacement.

The burner shield or windscreen came in at least three styles, these are cross-hatch pattern, stippled and smooth. My 1951 Coleman stoves came with the cross-hatch pattern wind-screen. The 1951 and 1952 Rogers stoves have the stippled version and the later Rogers have all had the smooth surface.  I soaked the ones in the photo with vinegar over night, then washed them with a toothbrush and soap and water. After that, I cleaned them with some metal polish and they came out great. Others were badly rusted and needed more attention, while others were so bad that I bead-blasted them and painted them black for use on custom painted stoves as shown later in this post. 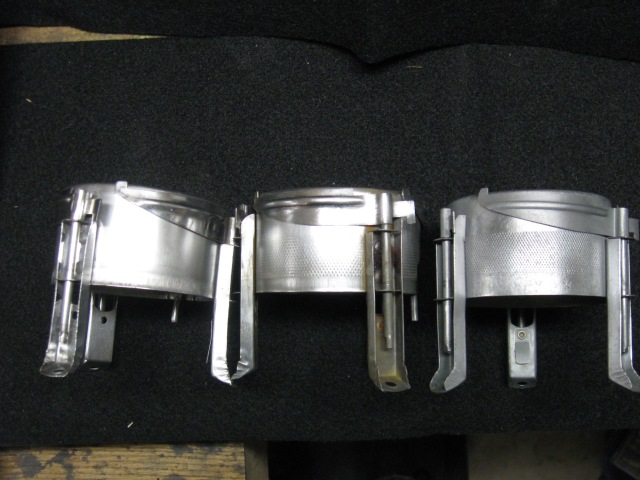 The 1951 Coleman stove was painted green and only had one silver label. I bought a replacement from OldColemanParts and it looks great. Most Rogers stoves, and other models are painted Olive Drab of some variation. The later Rogers and other models seem to use two labels. On Green tanks there is one silver label and one red label. On Olive Drab tanks there is one gold label and one red label. One guy who had been rebuilding these for years told me this was typical and the gold and red replacements are periodically available on auction sites. See the photo below for an example of a single silver label and the gold/red/olive drab example.

For colors, check my previous post on paint colors. There seems to be basically two for this stove. Green and Olive Drab. In that post I tested various colors and have two which are close, though not exact replacements.

The stove typically has an aluminum storage/cooking canister with it, but not always. Since they can be used with AGM M-1941 stoves, late-war Coleman 520s and M-1942 Mountain stoves, I have a few and just use them for whichever stove I’m using that day.

Valve knobs, vaporizer screens, vaporizers and burner bowls, can be bought from any number of people. I’ve found them at OldColemanParts and on auction sites from time-to-time. I’ve had little luck finding replacement preheat cups.

The pump assembly is similar to the M-1942 design. There are two gaskets. One is the check valve gasket and one is the filler cap gasket. Both will likely need to be replaced if they are original. If either is rotted and leaks, you can catch your stove on fire. At this point the first thing I do is replace these two gaskets. They’re cheap and well worth the peace of mind. I wrote a blog post about the air-check gasket if you’d like more information. 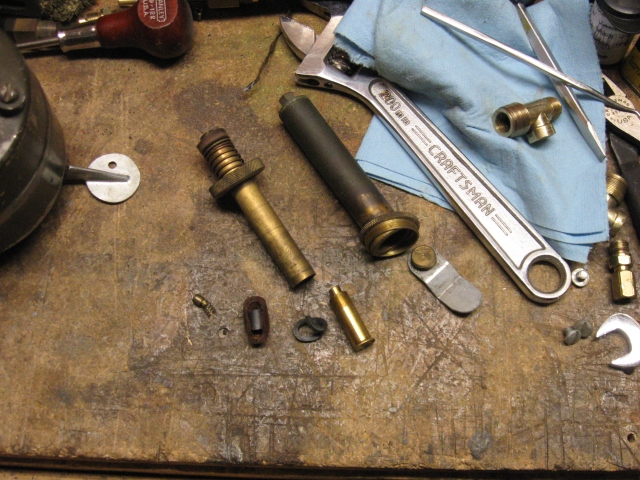 If your valve indicator knob is melted or gone, reproduction replacements are available at Old Coleman Parts. For fun, I bought a stove with a good knob and made my own as shown in this post about molding a valve knob.

I’ve fixed up seven so far; 1951 Coleman (Green), 1963 Rogers (Olive Drab), 1965 Rogers (camo-pattern) and others, and also a 1981 Fiesta (camo pattern) which I converted to a spare fuel tank. To make the tank into a spare fuel tank I needed to fabricate a plastic plug to replace the valve assembly and a custom plastic fuel cap. 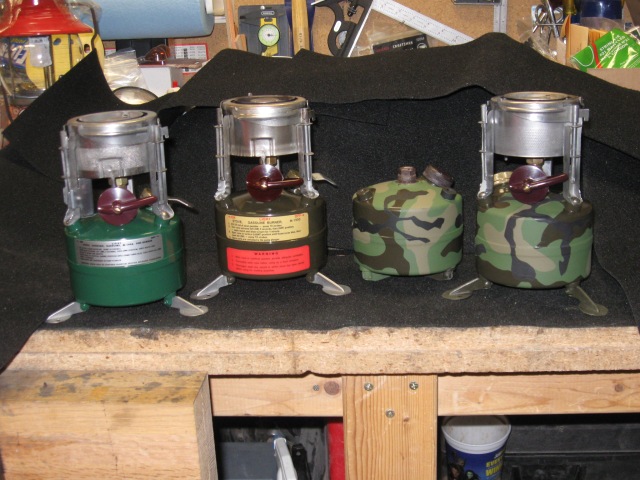 So far, the stoves work pretty well as boilers and I’ve used them on a few outings. Fixing them up and learning about them was a good hobby for the winter.