The mayor of Colorado Springs, Lionel Rivera, visited our house last night. I’m in the garage about to makes some cuts with my plate joiner and Luke comes in the garage and says, “Dad, the mayor is at the door”.  How weird is that? Seems he was looking for support for the upcoming republican primary in August, as he is now running for US Congress.

Well, dad arrrived on Tuesday afternoon. A little sooner than we expected, but it worked out fine.  I stayed home from work on Wednesday morning and we watched World Cup. During lunch we had a lively and interesting discussion about attitudes, personal beliefs and politics.  We agreed on some things and disagreed others. In the evening we all went trap shooting and had a good time.

One thing which I thought was a little sad was the feeling that he expressed about not being able to communicate with the kids. Nothing in common, he said. Must be the generation gap. The kids have a different perspective or attitude toward life. I think it was an opportunity missed on my part. I should have brought in Joshua and then created a conversation for him to see what goes on in the minds of young people today. But, I’m not usually that good at thinking on my feet.

He left after dinner last night (Thursday) and headed back home. He is 72 years old today. 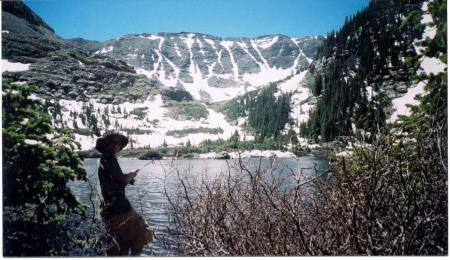 I’ve been planning a backpacking trip to North Colony Lakes down in the Sangre de Cristo mountains for several weeks. I spoke with Forest Service guy down at the Westcliffe work center about snow levels and the road conditions on South Colony road. You see, the plan was to 4×4 to the Rainbow trail and then backpack 2 miles to the Noth Colony trailhead and then  up the trail 4 miles to the lakes and set up camp. Darrell (Forest Service) said there was some work on the road, but that it would be no problem. That was last Wednesday.

So, we drove down on Friday (about 2 hours) and got to the gate on the 4×4 road and it was closed! What a bummer.  We made some phone calls but couldn’t get clearance to drive in.  The only other way to the trailhead was from the north over at the Horn Lakes trailhead. So we decided to give it a try. We got on the trail and hiked about three miles stopping at the  Macey Lakes trailhead. We were still 2.75 miles from the North Colony Lakes trailhead and were discussing the additional 4 miles this route was adding to our trip. Between Steve, Jeff, and Jeff and myself we decided to tackle North Colony Lakes on another weekend and go up to Macey Lakes. We did this trip last summer on the same weekend.

Since this is in National Wilderness Area and was the trail clearing weekend we brought the foldable bow saw and cleared some trees off of the trail.  Some public service for the boys.

It was cloudy and mild with the thunder booming across the Wet Valley and we even got a little snow. We camped in the same spot as last year and there was only one other tent set up near the lower lake. Saturday and Sunday were gorgeous days without a cloud in the sky. We camped at 10,700 feet and hiked on Saturday morning up to the lower lake. Deep blue skies, the deep blue lake, some snow here and there, green trees and of course the rough rockies all around us. B-E-A-utiful. Anyway Joshua, Luke, Paul, Taylor and Jeff B. fished the lower lake, while Jeff G, Steve N, Kyle, Zach and myself hiked up to the upper south lake (about 11,300 ft.). I fished the upper lake with Jeff and Steve but only Jeff caught a cutthroat trout. But, it was a whopper. 18 inches! I didn’t know they grew that big. Anyway, by the time I got back down to the boys a couple of hours later Joshua had caught and released 22 trout, Luke had caught 18 and released 17, including one with his bare hands . . . again, and Paul caught 9 and released 8. I caught 1 all day long and released it.  We came back to camp arond 6:30PM and ate our dinner, plus some fresh trout.

The photo was taken last summer at Macey Lakes. This year there was much less snow, so it made the hiking easier and also possible to get to the upper lake which is in the center above the lake in the picture, up over the moraine.

We hiked out on Sunday afternoon and stopped , as usual, in Canon City for burgers and tots at Sonic on US Highway 50. So, while I was disappointed that we didn’t get to the planned destination, we still had a great trip.

I took the boys trap shooting after work yesterday . . . yes, even Paul went. He shoots a youth, 20 guage and Luke shoots an adult size 20 guage. Joshua and I both shoot 12 guage shotguns. It was Paul’s first time and while he missed the first 3 or so, I gave him a little more instruction and he started hitting them. He shot two rounds, probably hitting 10 in the first round and 12 inthe second. Luke did better at something like a 14 and 17. Joshua was around a 10 and 16 and I shot somewhere around a 15 after a crappy start. From the 16 yard line I’m usually a 20 to 22 so I was a bit disappointed in myself. It was warm, but windy.

The Front Range Invitational Tournament (FRIT) was this last weekend (June 2, 3, 4) and it was a wild one.  Luke and Paul played on the same team just like they did in Pueblo back in February. We started out by playing  a weak team missing lots of shots and losing 1-0. The next morning started out even worse as we were down 2-0, 2 minutes into the game. Totally crazy! But the boys finally figured out how to play soccer at the level they are capable of playing and came back to score some goals with the game eventually ending in a 3-3 tie. We received 6 points for that game, but we needed much more to advance. Our third opponent was the toughest competitor yet, but they seemed to be very tired in the second game on Saturday. We played fabulously and won 6-1. The Sunday morning semifinal had us winning in a nail biter with a score of 2-1 which put us in the championship game against the same team we beat the day before. This Pueblo team was in a higher division than we were during the regular season and was expected to win it all. They seemed much more motivated as the score was 1-1 at the end of the first half. It was 2-2 at the end of regulation. And boy, were these guys tired. Five games in two-and-a-half days. It was still 2-2 at the end of the first 5 minute overtime, and it was still 2-2 at the end of the second overtime. So, the game was to be decided by penalty kicks. We lost in PKs and took home the silver. What a weekend!

I took the day off of work on Wednesday to attend the Air Force Academy graduation. Secratary of Defense Donald Rumsfeld gave the commencement address. We got to see an Air Force Thunderbirds airshow and Paul got to keep one of those cadet hats which they throw in the air when they are dismissed.